The Bears are in London to take on the Raiders in Week 5 Sunday 6th of October at 18:00 p.m (G.T)
The Chicago Bears are a professional American football team based in Chicago, Illinois. The Bears compete in the National Football League (NFL) as a member club of the 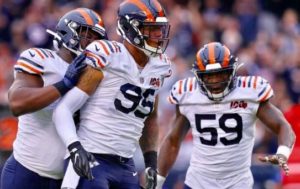 league’s National Football Conference (NFC) Northdivision. The Bears have won nine NFL Championships, including one Super Bowl, and hold the NFL record for the most enshrinees in the Pro Football Hall of Fame and the most retired jersey numbers. The Bears have also recorded more victories than any other NFL franchise.

The 2019 season is the Chicago Bears’ 100th in the National Football League! and their second under head coach Matt Nagy. They will attempt to improve upon their 12–4 record from 2018, make the playoffs for the second consecutive season, and break their eight-year playoff win drought. History Lesson:The Bears have a 7-7 record against the Raiders. The teams last played in 2015, with the Bears winning 22-20. The Bears won their last game in London, beating the Tampa Bay Buccaneers 24-18, in 2011. 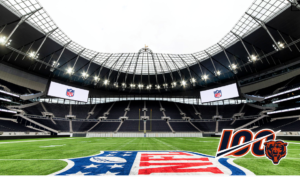 The new stadium opened in April of this year to be the home of Tottenham Hotspur FC. The club has a 10-year contract with the NFL that will result in at least two regular-season games a year. Tottenham Stadium has a capacity of over 62,000, roughly the same as Soldier Field, which makes it the largest soccer club stadium in London! “We shall be a home for the NFL in London,” said Daniel Levy, chairman of Tottenham Hotspur. “Their dedicated entrance, as well as dressing rooms and medical facilities in our East Stand, mean our stadium is the only one outside the United States specifically designed for the sport.”