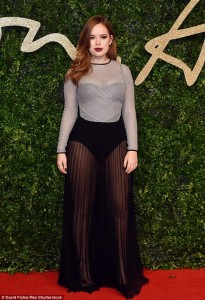 The London Coliseum is normally associated with ballet, opera and other classics, black ties and scenes from My Fair LadyÂ Â  but Monday the red carpet gave Fleet Street TabloidÂ  photographers an unexpected prize. Tanya Burr, the you tube heart throb triggered

flashes targeting her toned curves in the dramatic flowing number, which allowed her to show off her limbs, elongated in a pair of chic Christian Louboutin heels.

Miss Burr, who made her millions by becoming one of the globeâ€™s biggest vloggers, dishing advice on all things beauty and fashion as well as general musings on life to keen twentysomethings, told reporters he was detrmind to keep her private life separate and …hmm private. And quite right so as she got family support,Â  her husband Jim Chapman kept quiet.

Just to reminder our lovely readers the British fashion industry generates Â£21bn annually with the indirect spill over of Â£37 bnÂ  from IT, to tourism, catering and other associated service and industries.

The winners as voted by global participants were :