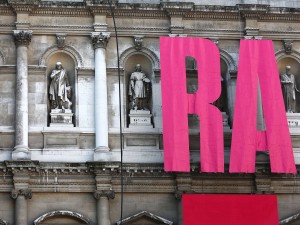 Every year the Summer Exhibition tries to sex up its game by getting a leading contemporary artist to provide a fresh new spin on the hanging of the vast number of works it displays.

The show is now in its 248thÂ year, having been held annually since its inception in 176. The worldâ€™s largest open-submission exhibition (that means anyone can submit work) was for decades out of step with the times, its walls packed from floor to ceiling with the efforts of the die-hard academic and eccentric amateur . In recent years, it has been criticized for promoting art that is reactionary and behind the times. This year, however, under the leadership of sculptor Richard Wilson, the Royal Academy has attempted to inject new life into the show. The results are interesting, but distinctly mixed.. While the past 20 years have seen huge changes, with the hang of the works ever sparser and more elegant (until now), and the selection vastly more contemporary, its ability to still seem quintessentially, strawberries-and-cream British remains â€“ and not unpleasantly so.

This yearâ€™s exhibition, boasting 1,240 works, has been co-ordinated by sculptorÂ Richard WilsonÂ â€“ best known for filling a room in the old incarnation of the Saatchi gallery with sump oil â€“ with an emphasis (for reasons that are unclear) on artist partnerships.

Choosing a theme based on artistsâ€™ working practices rather than their approaches means that the works have little or nothing to do with each other. In some ways this relates to part of the Summer Exhibitionâ€™s charm; as the worldâ€™s largest open submission exhibition, work ranges from the weird to the wonderful, with subject matter concerning the mundane to the divine.

Huge, hyper-detailed photographs of Chernobyl taken by artist-twins Jane and Louise Wilson hang on the entrance staircase, a riposte presumably to the Academyâ€™s complacent opulence. Later in the show, YBA bad boys (and brothers) theÂ Chapman BrothersÂ give us The New Arrival, a family of eyeless mannequins regarding a machine in which a couple of flayed male heads suck female breasts. Itâ€™s fairly horrible and suggests the pair are painfully in need of a few new ideas.