Touching Love Story with Hollywood 1969 with Leonardo DiCaprio and Brad Pitt playing a TV actor and stuntman who cross paths with the Manson cult, Tarantino has created outrageous, disorientating entertainment. Rick Dalton, played by Leonardo DiCaprio, a failing cowboy actor and alcoholic going to seed in the autumn of his career and in moments of bad temper beginning to resemble Jack Black. His best friend – pathetically, his only friend – is Cliff Booth, played by Brad Pitt in his Ocean’s-Eleven mode of easygoing competence and imperturbability. Cliff is Rick’s stunt double and has an awful secret in his life: a grisly event for which he may or may not be guilty. Cliff has to drive Rick everywhere because he has lost his license, and he is Rick’s best pal, assistant, factotum, and the person who has to straighten Rick when he bursts into boozy tears of self-pity.
Things head south for Rick and Cliff’s careers when Rick’s western TV show Bounty Law is cancelled. His agent Marvin Schwarz (an uproarious cameo for Al Pacino) tries persuading Rick to head out to Italy to reinvent himself in these new “spaghetti westerns” they have out there. But in the interim and on the basis of Rick’s boisterous turn on an episode of FBI, Schwarz gets him a job on a western TV show in America, Lancer, with Sam Wanamaker directing, and Rick has a weird epiphany. Apart from everything else, he is inspired by the fact that he lives next door to Sharon Tate (Margot Robbie) and Roman Polanski (Rafal Zawierucha), of whom he is entirely in awe. 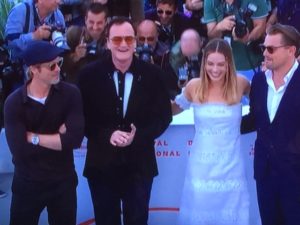 The mention of Polanski and Tate raises the stakes in all sorts of ways: Cliff is offered a blowjob by one of the girls and turns it down because she can’t produce evidence that she is 18. Rick finds himself opening his heart to a preternaturally intelligent child actress (Julia Butters) because he feels that he is over the hill. On hearing that she is eight years old, he mutters that in 15 years time she will know how he feels: a nasty ungallantry of which he is immediately ashamed. All this is a gesture of self-consciousness, a deadpan incitement – and there is no doubt that this is a very male movie, although Margot Robbie gives a sympathetic portrayal of Tate, Dakota Fanning is intimidatingly sinister as the Mansonite called Squeaky and Lorenza Izzo has a spirited turn as the mercurial Italian screen star Francesca Cappuccino.
The most outrageous scene – and the funniest – is Cliff getting a stunt-man job on The Green Hornet and getting challenged to a fight by Bruce Lee in his Kato costume. It is an extraordinary punch-up, though I’m not sure I agree with how Tarantino imagines the result; but I carried on laughing for about three minutes after the scene ended. The dark cloud of history lingers over even the lighter scenes, and generates an intriguing suspense (similar to Tarantino’s other historical fictions) around how the filmmaker will choose to resolve that inherent tension. 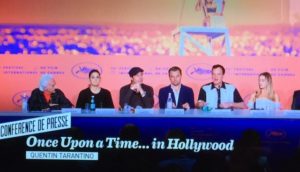 And then we get the finale, a piece of bloody mayhem which leads to a bizarre denouement which might well have you replaying the entire film in your head. It’s entirely outrageous, disorientating, irresponsible, and also brilliant.
•Once Upon a Time … in Hollywood screened at the Cannes film festival, and is due for release on 26 July in the US, 14 August in the UK and 15 August in Australia.