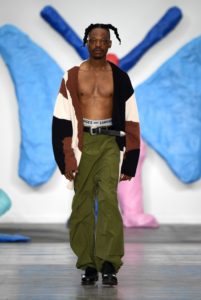 Really powerful new generation of UK talent had helped London Fashion Week become more exciting than its New York, Milan and Paris counterparts. Last weekend the capital came alive with dapper gentleman and stylish ladies for London Fashion Week Men’s spring/summer 2020.
The appointment of David Beckham as an ambassadorial president of the British Fashion Council (BFC) this year has further boosted London fashion week men’s. The former footballer, who will present a catwalk show for his brand, Kent & Curwen, on Sunday, told the Guardian: “More than ever, we have a real responsibility to engage and promote young and emerging creative talent. On the catwalks, exciting British menswear designers like Art School, BethanyBethany Williams, Charles Jeffrey Loverboy and Liam Hodges gave us a sneak peek at the trends that will dominate menswear next season. 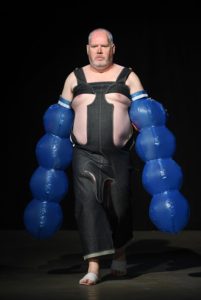 Eden Loweth and Tom Barratt, who design under a label named Art School which describes the nature of their experimental shows, have said that they “have always thought about how to represent queer communities in a new and more authentic way.” That way involves lots of dresses, which their audience whooped and applauded and may very well wear. And perhaps it speaks to a disenfranchised group who don’t see themselves reflected in the morass of wider fashion; but it will never be broad in its appeal. 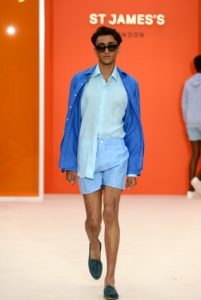 But it was off the catwalks and on the streets that London’s cool kids embraced an eclectic mix of British fashion, with two key trends leading the way: streetwear and slick suiting. From bumbags, bowling shirts and bucket hats to cycling shorts finished off with a fresh pair of kicks, hypebeast staples continued to reign supreme among the show-goers.