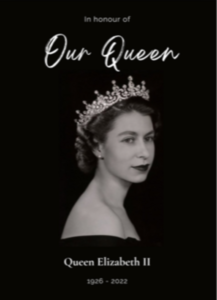 Her reign kick-started the television era, when households across Britain bought their first TV set so that they could watch the Coronation in Westminster Abbey in 1953. It was where she married Prince Philip, and now the funeral of Elizabeth II takes place in the same magnificent building. While unprecedented crowds of mourners will have made their way to London, a monumental broadcast operation employing the latest technology will ensure those at home are afforded a close-up view, so that the whole nation can be witness to these sombre and extraordinary events. Coverage of the day begins early on BBC1 with Breakfast (6am), followed by The State Funeral Of HM Queen Elizabeth II (8am). The lying in state in Westminster Hall will end at 6.30am, and at 8am the doors will open at Westminster Abbey. At 10.44 the oak coffin will be moved onto the State Gun Carriage of the Royal Navy to be brought to the Abbey.

Presided over by the Dean of Westminster and the Archbishop of Canterbury, the funeral service will begin at 11am, attended by the Royal Family and world leaders among the 2,000 mourners. The service will end with the playing of the Last Post, followed by a two-minute national silence, the National Anthem and a lament played by the Queen’s piper. After the service the Queen’s coffin will move as part of a solemn procession past Buckingham Palace, to arrive at Wellington Arch at 1pm. From there the journey begins to Windsor and the Queen’s final resting place in St George’s Chapel, where the committal service conducted by the Dean of Windsor is due to begin around 4pm. After a special edition of The One Show: Our Queen Remembered (6.15pm), Paddington 2 (6.50pm) is a moment for all the family to gather together and is a reminder of the Queen’s Platinum Jubilee meeting with the bear. Then there’s another chance to watch the day’s unforgettable moments in The State Funeral Of HM Queen Elizabeth II: Events of the Day (8.30pm). ITV will also provide comprehensive coverage, starting with Good Morning Britain (6am), followed by The State Funeral Of HM Queen Elizabeth II (9.30am) hosted by Tom Bradby and Julie Etchingham. In the evening (7.30pm) there’s a documentary account of the ten days since the death of Her Majesty. On Sky News, the day begins with Kay Burley Live From Westminster Abbey (5am), followed by The Funeral Procession (9am), The State Funeral (11am) then Dermot Murnaghan Live From Windsor Castle (2pm).