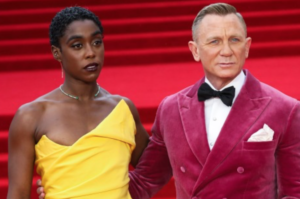 The 25th James Bond  — is finally arrived following a major celebration – its world premiere at London’s Royal Albert Hall on Tuesday evening. The glitzy, star-studded event welcomed our favourite 007 Daniel Greg himself, as the legendary secret agent, along with several fellow cast members and a quartet of royals. It’s been a long road to this premiere, which was originally due to take place in March 2020. Together with Daniel Craig on the red carpet were co-stars Rami Malek, Lea Seydoux, Lashana Lynch, Ana de Armas, Ben Whishaw and Naomie Harris, director Cary Joji Fukunaga and musician Billie Eilish, whose title song, “No Time to Die,” has already won a Grammy. Adding a decent splash of royalty to the A-list mix were Prince William, Kate Middleton, Prince Charles and Camilla Parker-Bowles

Craig said on the red carpet that the theater is exactly where a Bond film should be seen, and praised the cast and the director. “We’re so lucky to get him,” he said. “The cast on this film is just stupendous and Cary came along and I think has hit it out of the park. “

Directed by Cary Joji Fukunaga, MGM/Eon/Universal’s No Time to Die begins international rollout this week, hitting the UK on Thursday with anticipation at a fever pitch — and projections of a $90 million opening weekend across 50 offshore markets through Sunday.