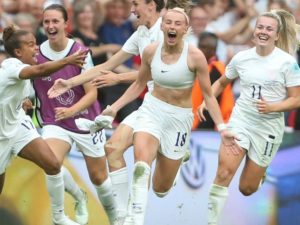 Substitute Chloe Kelly poked home a loose ball from a corner to send the raucous record crowd of 87,192 into a frenzy with ten minutes of extra time remaining. She waited for confirmation of the goal before taking off her shirt and waving it around her head, while being lifted by her team-mates in a moment of pure elation.

For more than 150 years football has been an intrinsic part of this nation’s culture and lifestyle, a form of identity, a unit of social currency. And yet for most of that time women have been excluded from this club and its perks: shouted down and shut out. The last time England’s men lifted a major trophy, the 1966 World Cup, women were banned from playing competitive football in any form. Now, against the same opponents in the same stadium, English football – all of it, not just half – has ascended to the very top step of the podium. On a monumental day in English football history, Sarina Wiegman’s side showed they were equal to anything a strong and physical Germany team threw at them.

Ella Toone had earlier come off the bench to score the opener in normal time before Germany’s Lina Magull set up a nervous ending when she equalised in the 79th minute. There were scenes of jubilation in the stands and an outpouring of emotion by players on the pitch at full-time as the magnitude of their achievement sank in.